Today I delivered a complete set of the Bibles Studies to Filiberto Perea in Rio Bravo, Mexico. He had been incarcerated in the prison of Santa Adelaida. He was a cocaine addict, but gave his heart to the Lord. He gained his release in 2006 and is still on fire for the God. He is excited that his church will be doing the same studies that helped to bring him to the Lord, and to get established. He may be a small dude, but he stands tall in the Lord. It was a blessing to be reunited with him after so many year 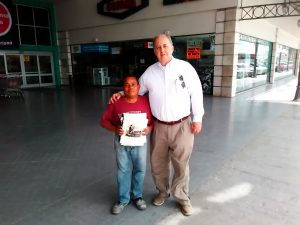